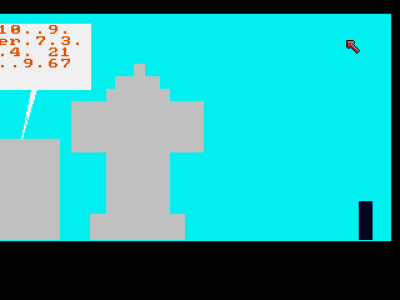 The Space Trek game was originally supposed to be based upon Space Trek (U) - The Return, hence why the opening animation so closely follows the events of that story. As it was taking so long though, I decided to expand it into a general Space Trek game.

Nowhere near complete. The title sequence is there, complete with some music sounding vaguely like a bad rendition of Star Trek TNG. =:S After that, there's some opening animation, before level 1 starts.

Level 1 involves flying the ship and dodging a load of asteroids for a certain length of time. I never got the object collision working though, so in actual fact nothing happens when the asteroids hit.

As soon as level 1 is over, AmigaBASIC flashes up an error message, as I never got round to doing level 2 onwards.

Back to Programming Index